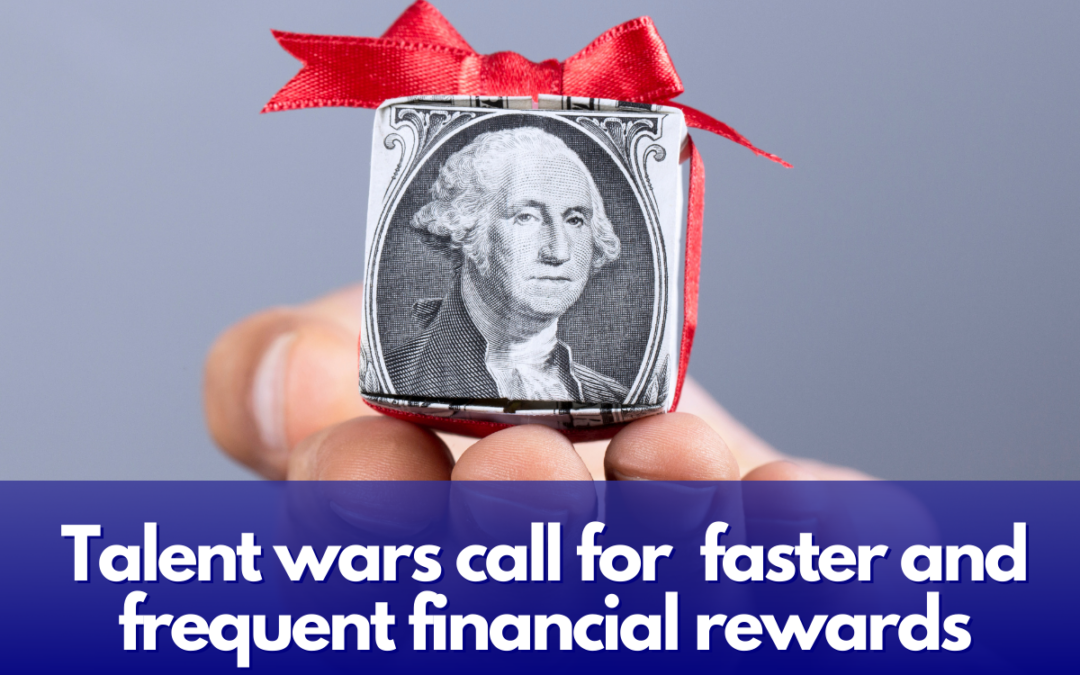 Inflation has complicated pay strategy, but it hasn’t stopped employers from using pay as a lever to find scarce talent. My HR Department discovered this informative blog, which was featured in HR Dive, and we wanted to share the highlights with you.

As the U.S. labor market grew tighter in 2021, employers responded by raising wages. The U.S. Bureau of Labor Statistics found that between February 2021 and February 2022, the average hourly earnings for private non-farm workers increased from $30.04 to $31.58, translating to about 5% growth year-over-year.

However, a beefier salary doesn’t tell the whole story. According to the Bureau of Labor Statistics, real hourly wages have actually shrunk by 2.6% during that same timeframe. In other words, while wages have increased on average, inflation has negated workers’ gains.

Executives have so far been reluctant, in many cases, to push wages even higher out of concerns that the talent situation may improve as workers return to the labor force. That stance is far from universal, however, as some employers have pushed salary increases beyond the prototypical annual pay raise. In a recent statement, Deloitte disclosed that it had performed an additional compensation market analysis halfway through its annual compensation cycle. This effectively gave many employees a pay raise halfway through the year… “above and beyond what they receive through the annual cycle”… according to the statement.

From The Exception To The Rule:

According to Tony Guadagni, Sr. Principal for the Human Resources Peer & Practitioner Research Team at Gartner, organizations are increasingly considering more frequent pay increases. “As of recently, this has been coming out more and more,” he told HR Dive.

In the past, employers may have decided to raise pay for certain workers more than once in a calendar year, “but it was more exception-based,” said Lesli Jennings, Senior Director of Talent and Rewards Consulting at Willis Towers Watson. Top performers in particular may have been rewarded with more frequent increases, she noted.

Today’s job market is pressuring employers away from that view. “Given what we’re seeing in the market, we really are seeing those types of increases surface more frequently than we have in the past,” Jennings said. “We can attract the right talent but also keep the talent that we have.”

“Short-term incentives are more common than base pay increases,” Guadagni said, “with employers honing in on spot bonuses.” Focusing on such smaller, one-time rewards allows employers to reward employees without locking the employer into market adjustments when economic conditions change, he continued.

“Organizations may believe they have hit the ceiling with base pay increases in the current market, which makes spot bonuses an appealing alternative,” said Jeanniey Walden, Chief Innovation and Marketing Officer at early wage access vendor DailyPay, Inc. As raises introduced during the pandemic largely were not enough to match inflation, “that’s when I think a lot of companies started to look at money as a driver and not just pay.”

That is to say, other financial incentives could fill the gaps that workers are experiencing. Walden cited transportation credits, such as gasoline stipends and subway fare credits, which help workers save money on their commutes, or even something as simple as company-provided lunches, which can save workers a few dollars per day.

When asked which roles or job types are most likely to be considered for more frequent pay increases, Guadagni stated that, while he did not have specific data on this question, employers are more likely to offer bonuses in areas with the highest attrition.

Another challenge presented by the frantic nature of the current market is difficulty in keeping organizational compensation benchmarks up-to-date; “They know they need to update their wages, but not by how much,” Guadagni said.

Even if organizations opt for smaller, one-time bonuses instead of base pay increases, the strategy adds to already heavy workloads of compensation managers. “If I’m a payroll manager and I have to process payroll weekly and all of a sudden someone comes up to me and asks me to process bonuses, I’m probably going to quit or cry — one of the two,” said Walden. “You’ve just made my life a lot harder.”

Jennings similarly acknowledged that adding additional steps to the regular payroll process can be cumbersome, but she noted that there may be a way to build in more frequent, scheduled increases… perhaps on a twice-per-year timeline.

It’s Not All About Pay:

According to some sources, the pandemic’s emphasis on pay raises has put a strain on organizations. Walden called the situation “a straight up wage war,” illustrated through the example of a strip mall. If a retailer like Target announces a higher minimum wage, nearby stores and fast food restaurants will have to follow suit or risk losing workers.

“The pandemic did a disservice for many companies and industries because it accelerated and inflated the focus on pay in dollar amounts rather than complete compensation packages,” Walden said.

While other compensation levers include bonuses, early pay access and other financial rewards, sources also stated that workers have not been attracted to higher pay alone. Guadagni said “Organizations will need to focus on what they can do internally for certain roles and professionals that competitors can’t.” “Compensation plays a part in that, but it’s not the entire picture,” he added.

A variety of paradigms exist. Jennings pointed to the example of career path modeling, including the ways in which organizations group and talk about different jobs. She said “Employers might want to consider developing a communication strategy for talking about careers in ways that are precise and relatable for employees.” “Communication about where people in different roles can advance helps to provide greater clarity for workers as well as employers,” she added.

Then there are the total rewards areas that complement pay, like flexibility, remote or hybrid work, and increased control over setting one’s own hours. “I think everybody is trying to double down on these perks, this employee value proposition, what makes us unique and getting managers to talk about those things,” said Guadagni. Jennings noted the importance of well-being programs and similar perks that drive employee experience.

Elsewhere, employers have focused on monetary incentives such as stock vesting. Last month, CFO Dive reported on a trend among organizations to allow employees to access the value of their equity holdings. Amazon, Apple and Google are among the firms reportedly using the strategy.

Enjoyed this excerpt? You can find the full article HERE as seen in HR Dive.

Is your organization looking for a partner to discuss strategy and implementation? Talk to us; reach out to schedule your initial consult:  Click Here To Schedule!